The Wilderness of Uncertainty 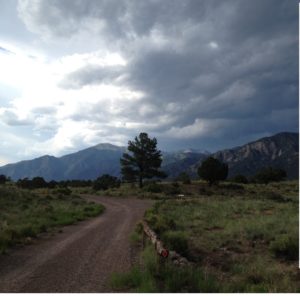 These days, that’s how many of my sentences begin.

I don’t know how threatened I should feel by the steady resurgence of Multiple Myeloma (“Frank”) in my bone marrow and blood, or when to begin treatment, or how much more my energy will diminish.

I don’t know if the drugs will calm “Frank” back down or what the new medicine’s side-effects will be.

I don’t know how much time I have.  Maybe a lot; maybe not.

And, I don’t know what uses of that time, however long or short, would be wisest, gladdest, and most faithful.

The uncertainty is a wilderness.

I’ve lived in the desert before, camped-out in provisional shelters of promise, and gathered, day by day, just enough mana-meaning to sustain me.

The wilderness doesn’t frighten me; but, thank God, it does unsettle me. Being settled isn’t always good.

Disorientation is one of many gifts which the wilderness has to give. Disorientation interferes with my tendency to orient my life toward predictability and routine. It prevents my letting familiar patterns blind me to new possibilities, and it doesn’t allow allowing easy comfort to deafen me to unexpected guidance.

I’m especially disoriented about how best to respond to the voice of vocation—the opportunities and obligations of calling. Calling and vocation describe God’s luring us and life’s inviting us to live fully, joyfully, and mindfully in ways that go with, not against, the grain of our DNA, gifts, talents, passions, and interests and that make it possible for us to love God and neighbor.

We answer that vocation—we say “yes” to that calling—with our life’s work, some of which we do in jobs and roles for which we are paid. The goal, of course, is for there to be as much convergence as possible of job and life’s work. Sometimes, though, our jobs are about making a living, while our true work is part of making a life.

I’m also aware, though, that they didn’t perfectly match—they almost never do. There were things I felt called to do—and ways I felt invited to be—that didn’t seem possible in the role of pastor. Partly, there was too little time and too much institution-tending. Mostly, though (I realize in retrospect), I let routine, security, and impoverished imagination throttle me.

In an old episode of M*A*S*H, Hawkeye said to Margaret: “Maybe you and I are just too choosy. We’re both looking for a custom fit in an off-the-rack world.” That’s certainly true of the relationship between life’s work and job, even when a job fits really well, as most of mine have.

For a long time, I’ve told myself that I’d get to the challenges of unanswered vocation and the wonders of unlived life “later.” Even since diagnosis with a treatable-but-incurable illness, I’ve had seasons of inattentive postponement. For that reason, it’s good for me to sojourn again in the wilderness of unknowing.

Here, without answers to most of my questions, I get to—have to—remind myself of the urgency what I do know:

There’s work to do, even when the job can’t be done.

Security is a numbing illusion.

Later is where dreams go to die. Now is the place where hope lives.