Tuning-in Again and at Last 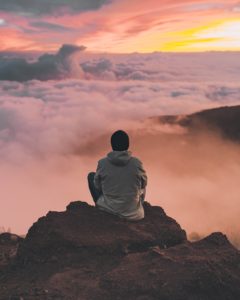 Given my work—writing, teaching, and preaching—I do a lot of talking, either on paper, on a screen, in a classroom, or in a worship space. A lot of talking. Last fall, I spent 13 hours a week in class, preached every week, and taught occasional classes or seminars for congregations and other groups. I also wrote, sporadically, for this website.

In early December, I grew tired—really tired—of hearing myself talk. I was overextended: I expended far more than I took-in. I wasn’t listening, reading, and pondering enough to speak from a reservoir of reflection. Instead, I scrambled frantically, before the next lecture, sermon, or article, for something worthy of my readers’ and listeners’ time and attention. I’m didn’t always find it.

Though I’ve still talked more than I wanted to, I’ve made an effort, since the fall semester ended, to shut up. I’ve read more poetry, novels, and short stories than I’ve read in a while. I’m immersing myself in James Baldwin’s elegant and incisive prose and in Roxanne Gay’s surgically-sharp insight and wisdom in books like Bad Feminist and Hunger.

I’m lingering over the Psalms and over the Sermon on the Mount. And, I’m sitting in silence so that I can hear, rather than vainly try to ignore, the riotous and cacophonous voices which live in me. I hope that, if I can assure them that I’ve heard them, they will be still enough for me to tune-in again and at last to the voice of the Spirit. If I’m ever to have anything to say which might be helpful, it will be a gift of that Spirit (I had Pentecostal grandparents, and this lesson “took”).

In addition to having been overextended, I’ve also been reactive rather than responsive. For reasons that seem plain to me, but which I know aren’t as clear to others, I think our nation teeters on the verge of crisis: fabrications displace facts; manipulative demagoguery shoves aside genuine leadership; narcissism diminishes commitment to the common good; and xenophobia shuts down the government. There are many other reasons I have a palpable feeling of impending crisis, including the ways some evangelical Christian opinion-shapers claim divine legitimacy for ways of governing which are plainly at-odds with the life and teachings of Jesus.

As the outrages continue, I’m tempted to comment on as many of them as I can. Outwardly, I mostly resist the temptation, while, internally, I’ve become maddeningly Pavlovian; I hardly pause between stimulus and response. Headlines and tweet-storms set me off, and, in my mind, I fire-off quick reactions. The result is that provocateurs set the agenda for me, rather than the good news of God’s just and merciful reign. I become part of the vicious cycle.

There’s also more than a little of the wrong kind of pride—hubris–in my thinking that people need to hear my reactions to the outrages du jour. Really?  I’m white, male, straight, nearly 62-years old, and solidly middle class. My roots are in Appalachia and the redneck side of Atlanta, but the fact that I know more about kudzu than about the Ivy League doesn’t change the fact that I benefit, and always have benefitted, from privileges I didn’t earn.

I can, should, and do openly question the arrangements, assumptions, theologies, and policies that keep my privileges in place. Beyond such questioning, however, on many of the issues we face, the only things people need to hear from me are: “I repent” and “I step to the side ” and “Please join me in learning from the people who have the most to teach us, people whose voices have been muffled and muzzled by men positioned as I am.”

Isaiah of the Exile (“Second Isaiah”) has a cycle of Servant Songs which describes a faithful servant-leader among God’s people. In the third song (see Isaiah 50:4-9), the servant says “The Lord God has given me the tongue of a teacher, that I may know how to sustain the weary with a word. Morning by morning God wakens—wakens my ear to listen as those who are taught.” God “wakens”—literally, “digs out”—the ears of those who would speak. I’ve been submitting, gratefully, to the awakening, reopening, and “digging out” of my ears. It’s not always pleasant, but it is a way out of the imbalance and reactivity in which I’ve let myself get trapped.

The song also gives me an important discernment question: “Is what I’m about to say likely to sustain the weary?” If not, don’t say it.  Be still and know—and be still until you know.