The Weather of the Heart 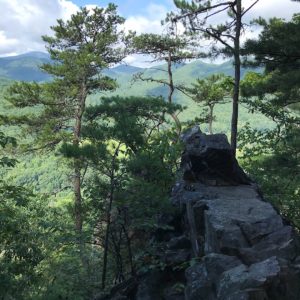 I’ve spent the last couple of days in Hot Springs. I doubt that many people imagine that the portal to heaven looks like this tiny town in the mountains of Western North Carolina, but I do.  It’s nestled on the French Broad River which is my personal Jordan. Wading in it, walking beside it, and listening to it remind of me of who I am and wash away who I’m not.

For almost eighteen years, I’ve come here in search of the Silence which eventually speaks, wordlessly but eloquently, to my needs, and to be swept up in the gladness which flows in me as water, wind, and Spirit carry clamor downstream.

Yesterday, I hiked, one more time, the Lovers’ Leap Trail; it’s not a long hike, but there are places where the path is steep.

I’ve been on this trail in snowfall, thunderstorms, gentle rain, refreshing breezes, and hot sunshine. I’ve looked from the Leap across the river valley in every season; and I’ve hiked it in every emotional climate, carrying sometimes volatile and sometimes peaceful weather in my heart.

Four years ago this week, I was an autologous bone marrow transplant patient at Duke. I was beginning to feel the effects of a massive infusion of chemotherapy to treat Multiple Myeloma. Before the next week was out, I’d been to the verge of death, rather than to the edge of a modest cliff. I had descended rather than climbed. I wondered if I’d ever see these beloved mountains again, much less lace-up my hiking boots and hit the trail. I’m so grateful.

I am, and I’m not, who I was when I first came to Hot Springs all those years ago.

I was a pastor; I’m now a professor.

I had good health; now, I have a life-limiting and life-threatening illness.

I am, and I’m not, who I was when I lay, weak and weary, in a sickbed in Durham four years ago.

I am alive. I almost wasn’t.

I have come to terms with death, at least as much as one can come to terms with it before “actively dying” (a puzzling phrase). It’s unlived life, more than the end of life, that unsettles me. I’m less anxious about ceasing to exist than I am about failing to live fully, gratefully, and joyfully.

Here’s what I know more surely now than ever; you already know them all, so just let me remind you:

Now is the time.

Joy is the end.

Praise is the song.

It was early and the air was cool when I began yesterday’s hike. By hike’s end, it was hot in the sunshine. But, when I took my first steps upward, just as the sun was rising, I imagined I felt  fresh hints of an approaching fall.

Seasons overlap before they finally change. So, too, with the weather of the heart.